Cranes are a symbol of longevity, immortality, prosperity and good health.  It is a Japanese tradition to fold a thousand origami cranes for someone who is sick to wish them a long life, prosperity and good health.  After the atomic bomb was dropped on Nagasaki, a girl who was dying of radiation poisoning began folding a thousand cranes.  These cranes were buried with her and as a result of her actions, folding a thousand cranes also became a symbol for peace. 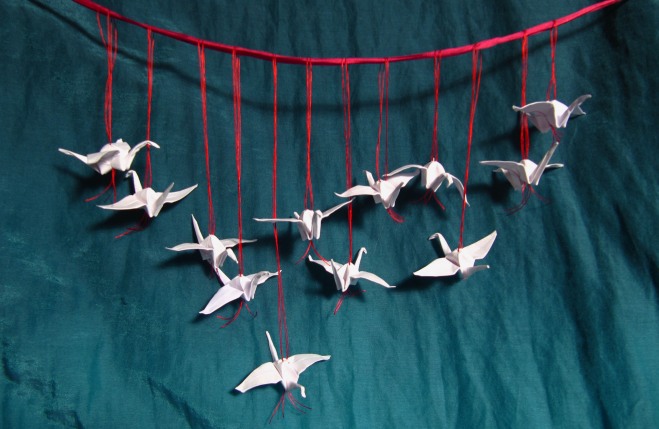 As I began my journey to improved health, I started a practice of visualization that involved imagining my uterus being healthy.  With a doctor who was intent on putting forth any and all scare tactics to force me into a procedure I did not want to do (that would also put me thousands of dollars into debt), the visualization had more to do with keeping my sanity than any real worry about being ill in any way.  I quickly realized that I had very little awareness of my uterus so I began to search for images of healthy uteri.  The flattened, dissected, cross-sectioned, pregnant images I found were not very helpful in really imagining how this “center of my creativity” was housed in my body so I was left to more-creative devices for visualization.  One person suggested imagining a garden.  When I visualized this garden it quickly turned into a jungle with frogs and, well, frogs just wouldn’t do.  My frog jungle morphed into a glowing sun and my glowing sun morphed into nondescript, little, white birds who removed unhealthy cells from my body.  I’m not certain where in my consciousness/subconsciousness/unconsciousness this infinite flock of  helpful, little birds came from, but when I mentioned them to Lisa she said, “Oh, like white blood cells.” 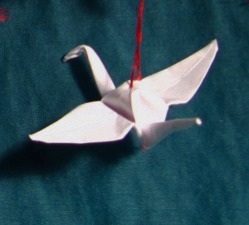 As time went on, white birds began turning up in one way or another almost daily.  Also, the form of qigong that I am learning is called Soaring Crane.  It is a medical form of qigong that focuses on accessing the healing Qi within oneself (Remember?  The body heals itself.).  The first routine very much mimics the movements of a (white) red-crowned crane in flight.  I have no choice but to honor this imagery in my art.  May these tiny, white, origami healers with their inch-and-a-half wingspan carry you to health, happiness and a spirit that soars.